AgriFood innovation helping to mitigate the impact of climate change 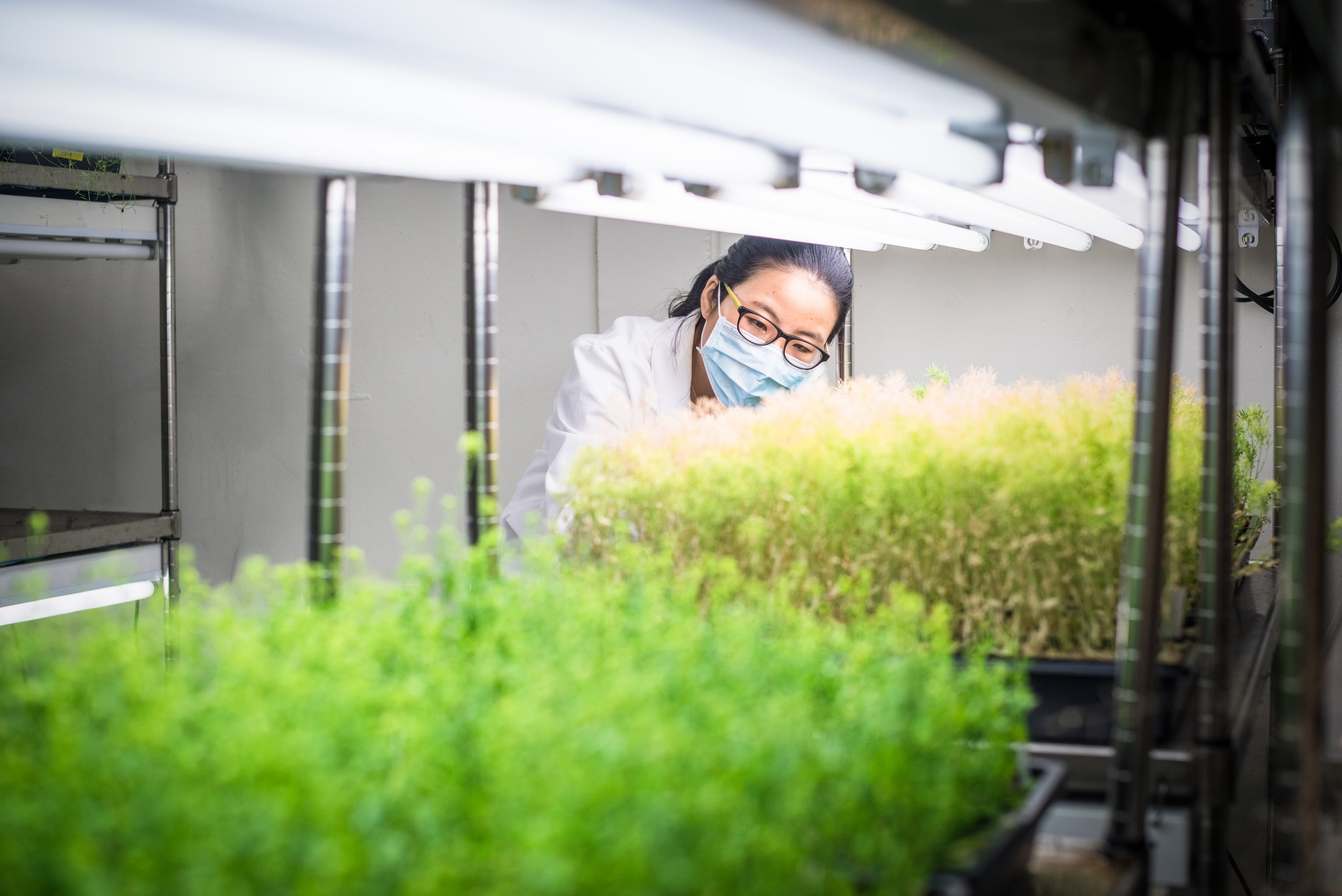 The vulnerability of agriculture to climate change together with a key position to mitigate its effects creates a challenging but exciting scenario for innovation in the AgriFood sector. From KTN, as a network working to drive innovation, we support companies and researchers working to develop more resilient food systems and to mitigate agricultural impacts on climate change. In this article we highlight just a few examples of these types of innovations.

Extreme conditions bring on challenges for the AgriFood sector

Predicted consequences of climate change include higher temperatures and an increase in the frequency of extreme weather events such as droughts, fires or heavy storms. In the UK, average annual temperatures are likely to increase between 0.7-3.5℃ by 2070, under a medium emissions scenario. But some of these changes in weather patterns are already impacting societies and industries around the globe, including the devastating 2019-20 fire season in Australia, an unprecedented heatwave in Siberia or the super-cyclones in India and Bangladesh. In the UK, 2020 has brought record-breaking weather conditions, including the wettest February and England’s driest May on record. This variability between extreme conditions make agriculture and food production even more challenging.

The AgriFood sector is highly inter-connected with climate change; whilst food production is greatly dependent on the weather, agriculture is also an important contributor to greenhouse gas (GHG) emissions. Impacts on food systems are not restricted to the direct effect of higher temperatures, elevated CO2 or water scarcity. A warming climate is also aggravating land degradation, reducing the availability of fertile soil for food production. Climate change also challenges long-term planning in agricultural production and it is increasing the severity and changing the geographical distribution of insect pests. Unprecedented weather conditions in Kenya due to climate change have contributed to the worst outbreak of desert locusts in 70 years, which has caused devastation across areas of Africa, Asia and the Middle East.

Regarding its contribution to climate change, in 2019 agriculture accounted for approximately 20% of the total GHG emissions worldwide; looking at the entire food chain, the contribution increases to approximately 29%. In the UK, agriculture contributes to approximately 10% of the total GHG emissions. Before reaching our plates, food production contributes directly and indirectly to the generation of GHG at various stages of the supply chain. Livestock produces methane during digestion, nitrous oxide is released from fertilizer use and the transport and packaging of food often relies on fossil fuels. Reducing the impact of agriculture on climate change is a priority reflected in national and international policies. In 2019, the UK legally committed to reduce GHG emissions to net zero by 2050; contributing to this goal, The National Farmers Union (NFU) has developed a strategy to ensure net zero emissions from agriculture by 2040. At the European level, the From Farm to Fork Strategy aims to build a sustainable food chain and it is part of the European Green Deal, a strategy to make Europe a climate-neutral continent by 2050.

We highlight below a few examples of innovations in the sector. It gives an insight into some exciting projects and activities currently underway:

Increasing farming’s efficiency reduces its impact on the environment whilst simultaneously improving productivity. One approach to this is the implementation of Precision Agriculture. PA is a set of farm management techniques based on using real-time data on the condition of crops, livestock and the environment, to ensure maximum efficiency and reduced environmental impact is achieved.

Water scarcity and a reduction in fertilizer use are pressing issues for crop production under a climate change scenario. Careful monitoring of field and crop conditions allows optimisation of input applications. An example of this is the Water Efficient Technologies (WET) centre, a demonstration centre for best practise in water efficient technologies for the soft fruit sector developed at NIAB EMR, in collaboration with a range of commercial partners. The system includes numerous sensors that collect environmental data influencing crop development and productivity. A fully automated precision irrigation system uses real-time data to match water supply to demand, maintaining moisture at specific levels, optimal for crop development at each stage of the growing season. The system is connected to a dashboard that allows growers easy access to real-time moisture data.

Another example is the work undertaken by the Agricultural Engineering Precision Innovation Centre (Agri-EPI Centre), one of four Agri-Tech centres established by the UK government working to address challenges in the livestock, arable, horticulture and aquaculture sectors. The centres are a collaboration between government, industry and academia. In collaboration with a range of partners, one of the Agri-EPI Centre projects involves using big data to better understand the impact of beef and dairy production on greenhouse gas emissions in New Zealand. They are using a range of precision agriculture technologies such as animal sensing, 3D cameras and automated weighing equipment.

IPM is an approach that combines a range of tools to control pests such as biological, physical and chemical technologies, aiming to minimise costs and reducing environmental impacts. With an increasing frequency and diversity of pests as a consequence of climate change, and stricter regulations on chemical treatments available, finding innovative solutions that reduce environmental impacts is essential.

A key focus of IPM is the use of biocontrols and alternative technologies to traditional pesticides. An example of this is a fruit fly biocontrol developed by  Russell IPM in collaboration with a range of UK and international partners. Fruit fly is a serious threat for the fruit industry and traditional control measures are not efficient. Their product is based on an attract and kill system, using different pheromones for attracting females and males, as well as a soil treatment for pupae. The system includes real-time monitoring of pests and has enabled farmers in Bangladesh to reduce fruit fly infestation by more than 80% in guava and bitter gourd.

A different approach to reducing the application of chemical treatments has been developed by Thorvarld to combat powdery mildew, an important pathogen for strawberries, cucumbers and tomatoes, amongst others. Powdery mildew rapidly becomes resistant to fungicides, complicating control with traditional methods. Thorvald’s technology involves weekly exposure to UV light treatment, which is provided by a robot, helping to reduce labour costs. UV light treatment leads to 80 to 95% reduction of mildew.

Breeding for more resilient plant varieties is another approach for adaptation to climate change, aiming at finding crop varieties with higher disease resistance, improved tolerance to extreme temperatures or lower water requirements. However, breeding is not only used for improved crop selection, but also in innovations looking at reducing the impacts of agriculture on climate change. An example is the work done at Aberystwyth University, where they have developed a range of Aber High Sugar Grasses (AberHSG) for feeding livestock, which drastically reduce methane generation whilst simultaneously increasing yield from livestock products. Since their first variety was released in 2000, their grasses have been grown worldwide.

CEA aims to create constant optimum growing conditions for a crop, allowing year-round production with independence from the climate. CEA involves crop production in greenhouses or other protected structures that allow full control of environmental conditions, as well as integration with innovations such as vertical farming technologies. CEA systems reduce the risk associated with increased weather variability and frequency of extreme events as predicted with climate change. Whilst CEA technologies provide protection against climate uncertainties and they allow production on non-agricultural land; they often require high energy inputs, making the technology expensive and with a potentially greater environmental impact.

However, different innovations have been developed to ensure CEA contribution to climate change is minimised, an example is from the company Low Carbon Farming. With more than 29 hectares of greenhouse space across 2 sites, Low Carbon Farming will use heat from wastewater to heat up their greenhouses. Their chosen sites are located near water treatment plants and by using ground source heat pumps they will inject previously wasted heat, allowing a 75% reduction in GHG emissions. Glasshouses also include a range of precision agriculture techniques to ensure optimal water efficiency and fertilizer inputs.

An advantage of CEA systems is that crops are often grown soil-free, reducing environmental impact and allowing a more accurate control of any inputs. Many companies are working to optimise this, an example is Airponix. They have developed a fog generation system that provides plants with everything they need to grow. This nutrient-rich fog is formed of <20micron droplets and requires low energy inputs. The system is fully automated and can be operated from a mobile phone app; some of the crops that can be grown include root crops, soft fruits, brassicas and others. Another example is a Deep Water Culture (DWC) hydroponic growing system developed by Phytoponics, based on managing the rootzone. Plant roots are suspended in nutrient-rich water, which is kept oxygenated by built in aerators. An automated system allows control of the water solution to achieve optimal conditions for plant growth. The system has been used to grow vine tomatoes, cucumbers and peppers, with recent trials on soft fruits.

It’s not only food production that contributes to climate change, but also other parts of the supply chain, including processing and distribution. As such, many innovations on food packaging technologies exist, aiming to lessen its reliance on plastic and reduce the contribution to climate change of this part of the Agri-Food sector.

Biome Bioplastics are a UK company that has developed a range of bioplastics, made completely or partly from biological sources such as potato starch, sugarcane or cellulose. They are biodegradable and compostable and can be used for a range of products, including food packaging. Other emerging packaging solutions include Oceanware, developed by Oceanium and made from sustainably-farmed seaweed. Seaweed provides an interesting alternative to plastic packaging as seaweed farming sequesters CO2, contributing to the reduction in GHG effect; it doesn’t require freshwater to grow and it absorbs nitrogen from the oceans, reducing ocean acidification. Another example is CuanTec, they are processing shellfish waste to extract chitin, which is then used to make food packaging material. By using waste to develop their primary product, they are working towards a circular economy, aiming to find value in different parts of their production.

If you’re working on an innovation in the AgriFood sector and would like support to find funding and/or collaborate with others, get in touch with the KTN AgriFood team.

This article was written by Carlota Gonzalez Noguer, a PhD student at the University of Reading and NIAB EMR, during her 3-months placement with the AgriFood team at KTN