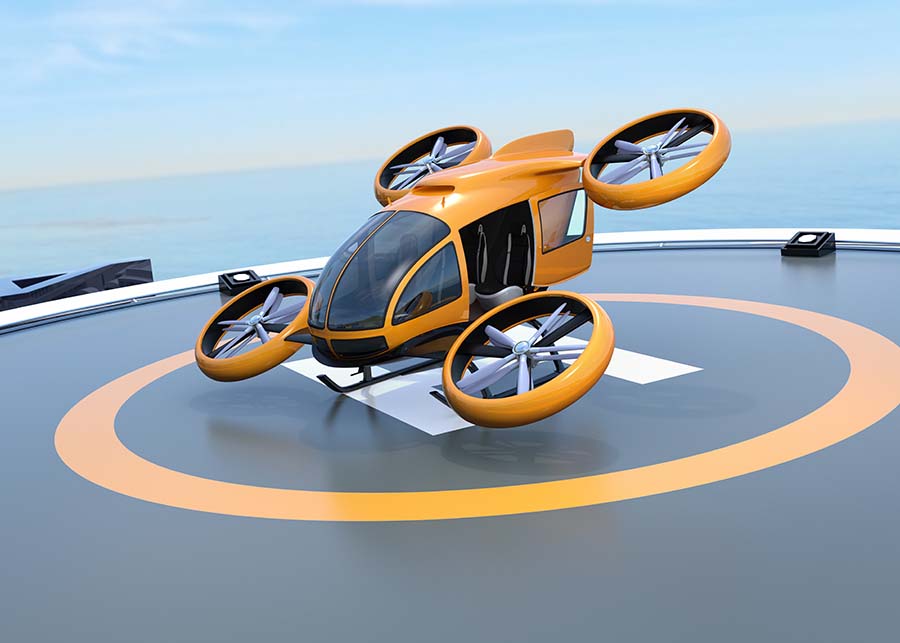 Welcome to the second edition of the Future Flight newsletter. In this issue, we’re taking a closer look at two projects, Skyfarer and Airspace Integration for Drones, that are beating a path towards regulatory approval for drone deliveries of medical supplies to help in the fight against Covid-19.

Skyfarer and Airspace Integration for Drones will both conduct test flights that aim to demonstrate the feasibility and safety of autonomous aircraft for delivery of medical supplies, an important step in gaining regulatory approval that would see commercial drones take to the skies. Currently, drone flight “beyond the visual line of sight” (BVLOS) requires segregated airspace that excludes all other aircraft so the drones can operate safely, severely limiting their commercial use. By demonstrating that such flights can be carried out safely alongside other airspace users, these projects could help to usher in a new transformative way to deliver time sensitive goods and services.

Skyfarer is a drone delivery operator that plans on establishing a flight testing corridor in the Coventry & Warwickshire area. Initially, the project will see drones flying in a section of airspace that is restricted to most aircraft, except for police helicopters and the air ambulance for example, in order to demonstrate safety BVLOS operations. The project is primarily concerned with testing detect and avoid capabilities, in the hope of gaining regulatory approval from the Civil Aviation Authority (CAA) later this year. Technology trials are scheduled for May, after which live trials will follow, which will hopefully see medical supplies delivered by drone by the end of the summer.

There are many regulatory hurdles to clear for Skyfarer, because in addition to flying beyond the visual line of sight, the vehicles will also transport pathology samples to hospitals, requiring dangerous goods approval. The medical supplies that Skyfarer will initially transport, pathology samples and blood, are both time sensitive, with blood in particular having to be processed within 12 hours of being taken. Current ground logistics often means this 12-hour limit is surpassed, meaning the blood must be thrown away leading to huge amounts of waste. The Skyfarer team believes that with drones in the supply chain, delivery of blood can be carried out within just six hours to any part of the country.

Airspace Integration for Drones, a project run by Trax International, uAvionix, ANRA and Plane Finder, has similar aims to Skyfarer in that they are seeking regulatory approval to enable drone flights in “non-segregated” airspace. They have initially established a temporary danger area (TDA), a name for “segregated” airspace that is reserved for a specific purpose.
With the TDA approved by the CAA in February, Airspace Integration for Drones is clear to begin testing the first phase of the project, which will see drone trials in the TDA through to September. This summer, they will begin the Transponder Mandatory Zone (TMZ) consultation that will help pave the way to phase two of the project in non-segregated airspace.
Surveillance hardware built by uAvionix builds on the Plane Finder network to monitor the airspace which allows information about the location of other aircraft to be passed to a drone operator on the ground. Upon completion of the project, a report will be submitted to the CAA, and if the trials are successful, this method of collision avoidance could be adopted widely by drone operators. In this way the Airspace Integration for Drones team sees its work as enabling the whole UK drone delivery industry and is not limited to a specific operator.
Drone delivery of time-sensitive medical supplies is likely to be of most benefit in rural and hard to reach regions of the UK, for example the islands off the west coast of Scotland. In this context, drones can make journeys that would otherwise be impossible or dependent on irregular ferry timetables.
Drone delivery will improve the UK’s response to Covid-19 and disease outbreaks generally by increasing the frequency and reducing the duration of time-sensitive deliveries. But if Airspace Integration for Drones and Skyfarer are successful, their impact will be felt throughout the UK as they carve out a path for the regulatory approval for commercial use of unmanned aerial vehicles beyond the visual line of site, something that so far has proved elusive.

The team at Sees.ai, in a UK first, secured regulatory approval from the CAA to fly drones BVLOS without pre-authorisation, in non-segregated airspace and from a control room over 50 miles away. You can watch part of their first trial in the video below.
Featuring alongside Sees.ai is the team from Motion Robotics in Southampton. They’re working on demonstrating medical products, including insulin, being autonomously loaded to and unloaded from a drone. The whole process, including take off and flight landing, is designed to have minimal human intervention.

The last few months have been an incredibly busy and exciting time for us at the Future Flight Challenge. All 34 Phase 2 projects have now started, and already we are seeing the development of initial capability demonstrations for many projects, from software solutions to flight trials. Several projects have already received global media attention, which is great to see.
Within the team we are working hard to define our plans for the next phase of the challenge. We are refining a vision and roadmap for the future of flexible air mobility and have developed several use cases to help us understand the underpinning innovations required. We are also finishing a piece of work on the future aviation safety case and are interviewing for a social sciences Research Director.
All these strands are helping us outline any work we need to fund to help us realise our vision and shape our Phase 3 competition, due in Autumn 2021.
I want to stress that Phase 3 of the challenge is seeking the same broad range of bidders as Phase 2. There is no need to have taken part in an earlier phase, the competition will be completely open. From start-ups and SMEs through to global organisations and academia, we're covering every aspect of the aviation system.
Over the coming months we will share the next steps and work with the Future Flight community to develop project ideas and build the consortia to deliver them. If your organisation shares our passion for a novel, green aviation system, get ready to join us through the summer.
Gary Cutts, Challenge Director, Future Flight

The CAA has been supporting the drone organisations that received funding from the UKRI for the Future Flight Covid-19 Challenge. Eight organisations in total came forward and asked for our assistance.
The CAA’s Innovation Team offered rapid pre-assessments of the proposed UAS operations, prior to each organisation starting its application(s) with the CAA’s regulatory teams.​ The pre-assessment served two objectives:
Firstly, to anticipate complex operations in terms of safety implications, so the operator could consider how to manage these complexities. Such operations are likely to incur additional review and investigation by the CAA and a more comprehensive safety case is required, resulting in longer timelines to establish a UAS operation designed to support the front-line services response to the Covid-19 situation. For instance, we identified complexities around integration of aircraft with other airspace users, operations over densely populated or high-risk environments and carriage of Dangerous Goods.
Secondly, to identify the regulatory approvals required to conduct the operations, then plan and coordinate support from the regulatory teams involved in delivering the required approvals.​
Some organisations have reported progress via press releases, which we have followed with great interest. The CAA is proud to have helped the government and the drone industry supporting front-line services responding to the Covid-19 crisis.